What is a Photo Safari?

Traditionally there have always been two types of safari…hunting and photographic….and we at Pangolin Photo Safaris would rather “shoot to thrill” than shoot to kill!

Before digital photography came along wildlife photography was always considered to be niche and out of reach to your average safari goer. It was an activity designed for the hardcore enthusiast and limited to owning specialist gear. But when digital cameras became mainstream, and more affordable, all of that changed.

Today, the majority of clients that arrive on safari do so armed with just their cell phones or tablet, as they may not have wanted to take the financial plunge of buying a state of the art DSLR camera for the sake of what might be the trip of a lifetime. With the best will in the world, cell phones and iPads are not going to get you the image that you will go back to again and again to wow your friends and followers with. They are just not designed for that.

The subjects are often too far away (or moving too fast), and pinching and squeezing your screen is only really going to play havoc with the final resolution of the image. Until smart phone manufacturers figure out how to accurately mimic the functions of a DSLR camera, they are pretty much only purposed for the ‘selfie’….and there is no shame in that….apologies to all selfie-ists!)

One exception to this rule however is when you want to grab a landscape image. Here cellphones can be great and lets mnot forget their video capabilities too.

So, what is the difference between a modern-day safari and a photo safari?

While both tend to take place in the same locations, they are conducted in several different ways. In our opinion, this is what you need to conduct a proper photo safari…

We always get asked what is the best camera to use for wildlife photography and the simple answer is … “the one you can afford and have in your hand at the time.”

The sky is the limit as to what you can spend on a camera these days, but cost is not always an indicator of the image quality you are going to produce. In fact, the more money you spend the less automatic functionality you will get, and the more you really need to know about what you are doing, before taking the plunge and buying a top end camera body.

At the Pangolin Chobe Hotel, we have opted for the Canon 80d coupled with a Sigma 150-600mm lens. We believe, this is a tried and tested combination for guests who arrive without cameras and want to use one of ours (which we supply free of charge). They are certainly not your average “point and shoot” set-up, but strikes the perfect balance between ease-of-use and capability.

Amazingly, when we ran a recent survey with Pangolin Photo Safaris guests, we found that 70% of our clients turned up without a camera … as they knew we would be supplying them with one. They just wanted to give it a go!

Most safari vehicles are designed to seat up to 9 or 10 people at a time, excluding the driver – and maybe, if you are lucky – a tracker too positioned over the front left wheel.

This is too many people for a photo safari. You need room to move. Room to get the elbows out to steady the camera. Room to store your gear. You definitely need a window seat too.

In most high-end camps and lodges, you should be offered a maximum of six per vehicle but ideally four. Yes, you do pay for this exclusivity, however the modern wildlife photographer will confirm that this is a more essential component to a safari than a fancy room with copper baths and room service!

As to boats, the same rule applies. You need room to move and store your gear as well as stability. Boats with deep V-shaped hulls are not ideal in river situations, as they are more susceptible to rocking, and can’t get into the narrower channels.

Our photo boats in the Chobe are purpose built with eight fully rotating seats down the centre of the boat which allows for plenty of gear storage, movement and naturally stability of what is a very shallow, flat hull. 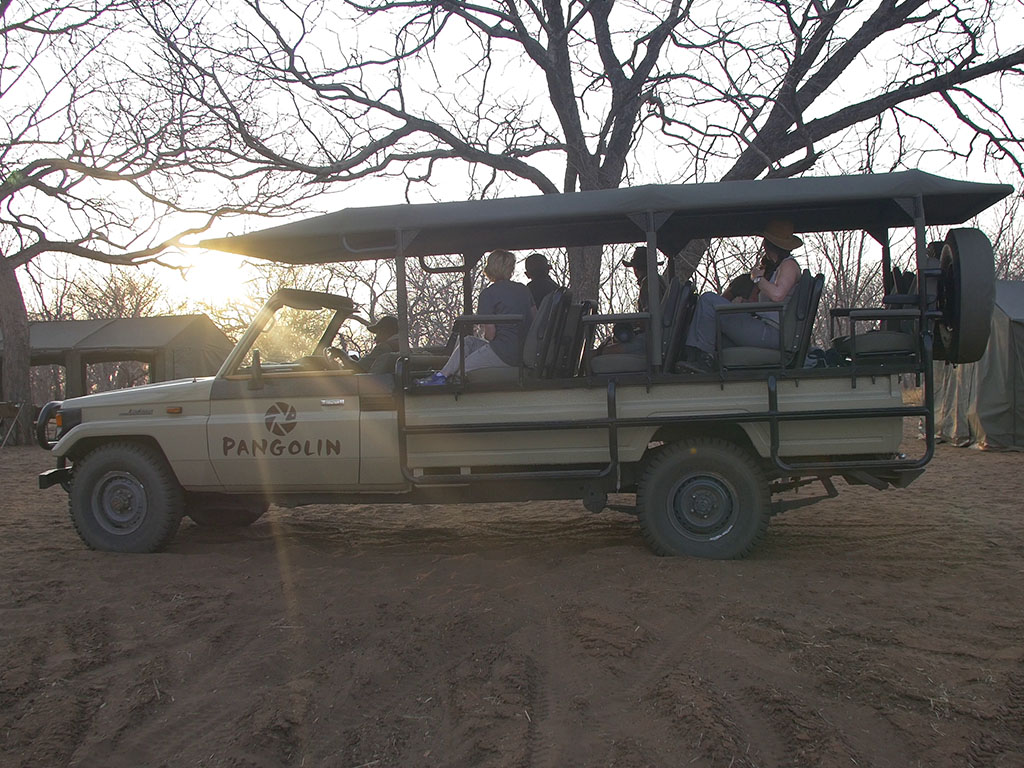 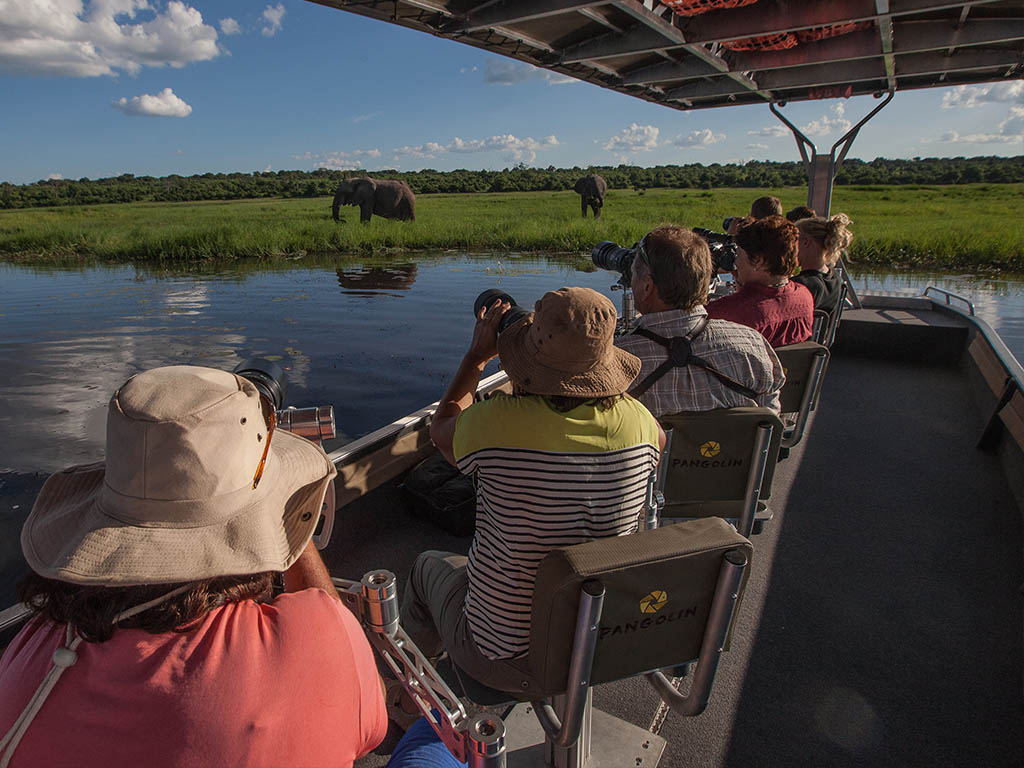 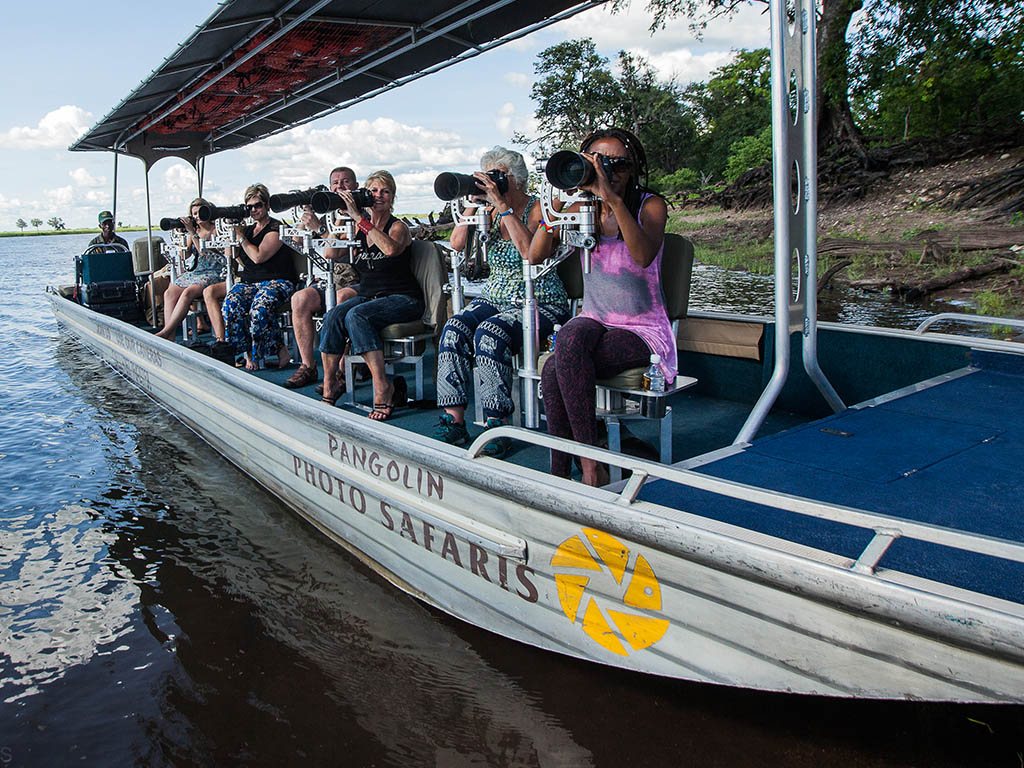 This brings me neatly onto camera mounts and gimbals. For any lens over about 300mm in focal length it is a huge advantage to be able to rest your camera on something to stabilise it. This is especially true in lower light conditions (early morning or late afternoon), where you might have to employ a slower shutter speed to make up for the available light, and therefore even the tiniest movement of the lens can jeopardise the sharpness of the image.

For the boats, we use state of the art gimbal mounts, which attach to the lens collar of the larger lenses. These work really well, especially on a boat that is never exactly still at times by its very nature.

For vehicles, there are several options on the market, with varying levels of complexity and sophistication, but in our opinion is pretty difficult to beat a good old height adjustable bean bag.

On our extended Land Cruisers in the Chobe (although it does seat eight), everyone has a window seat, armed with your own bean bag. Our land cruises were chosen as the best-in-class for the terrain and comfort in the Chobe. Having eight seats on the Land Cruiser and the photo boat also allows us to keep the same group of photographers together with the same photo host on land and water. 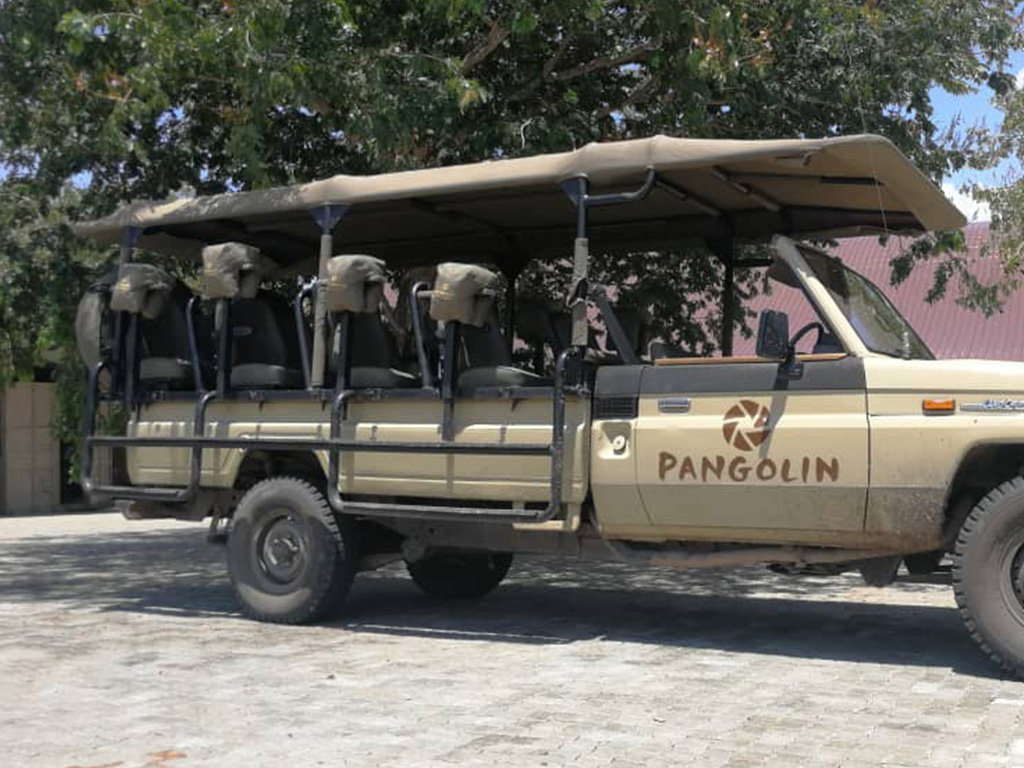 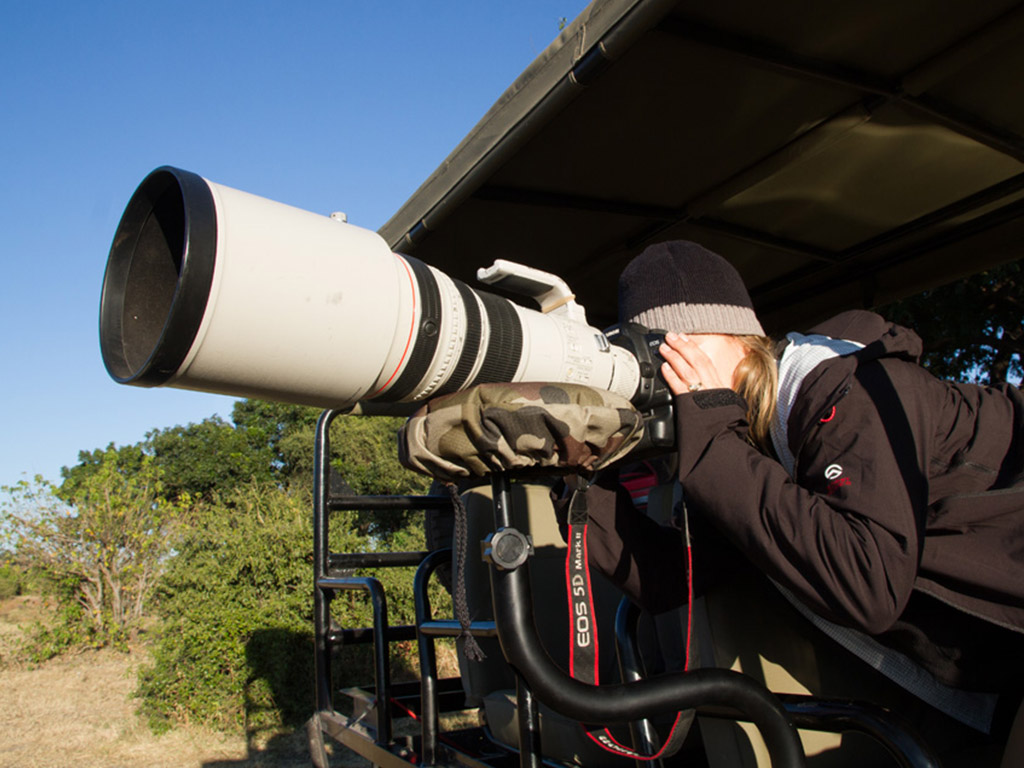 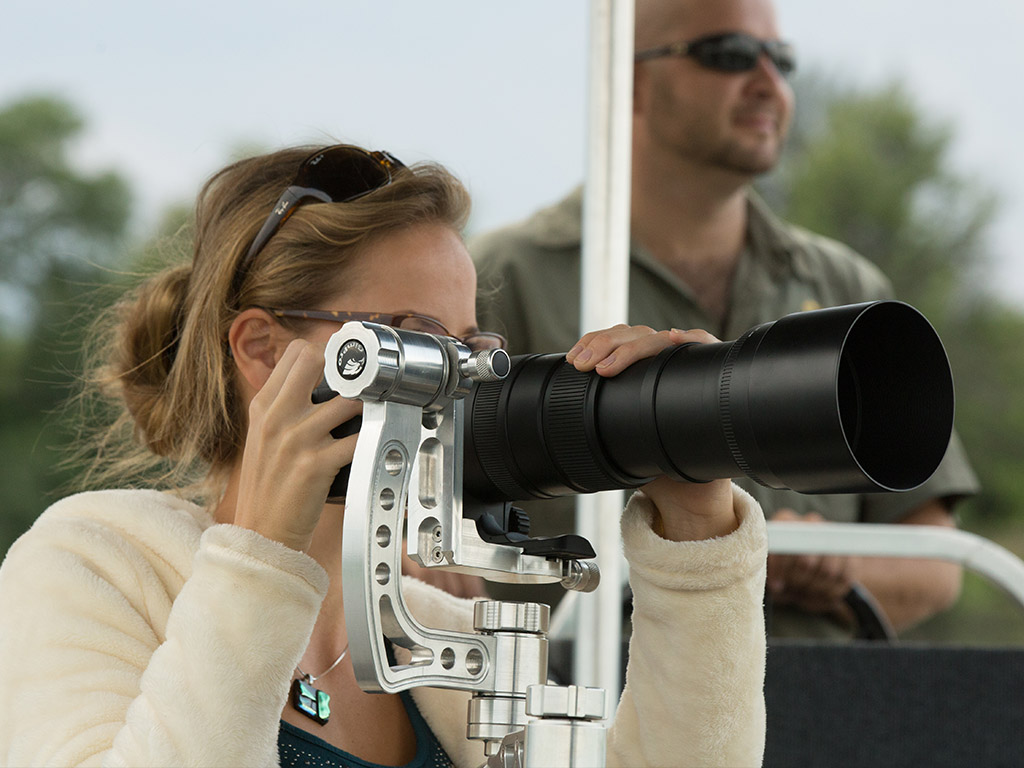 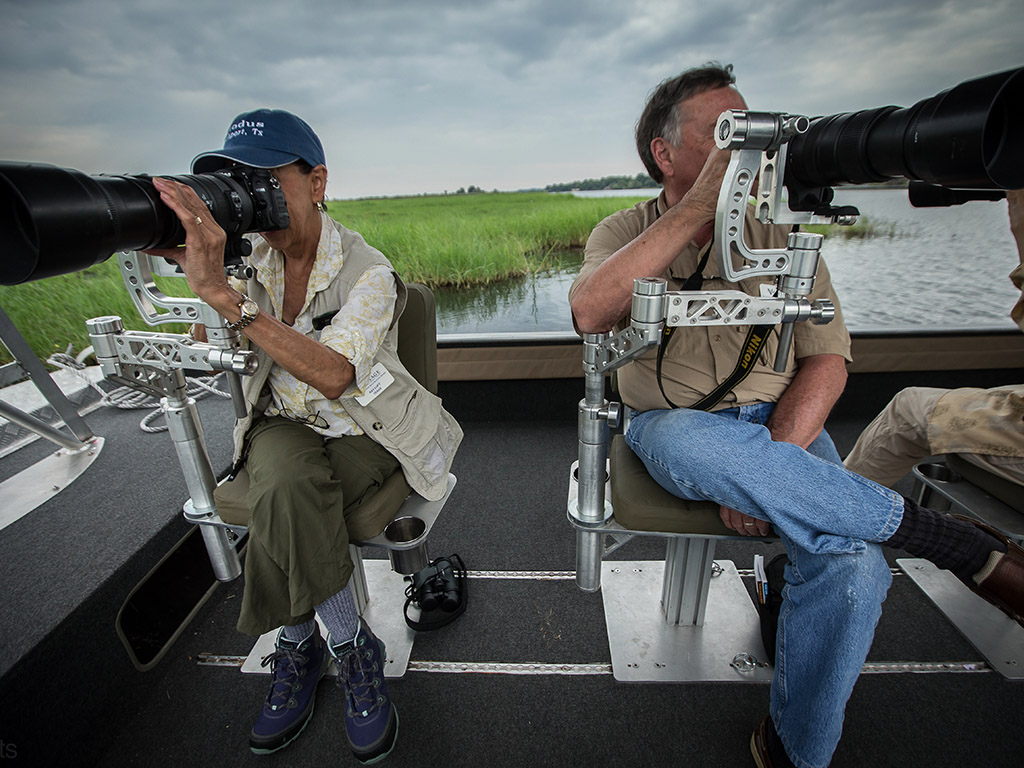 In our world eight is the magic number!

Eight is just the right size for a photo group. Happily it’s also the same number of people who fit on one photo boat; an extended land cruiser; or even smaller vehicles in the Okavango Delta; where the two vehicles accommodate eight guests and work as a team to find sightings.

Eight is also an easy number of people work with for the accompanying photo host. Any more than that, and guests will not get the personal attention we strive to offer. Fewer than eight also means that the cost per head on safari becomes more expensive, when the associated costs of the host’s accommodation, transport and time are divided by a smaller number. Eight is a sweet spot. 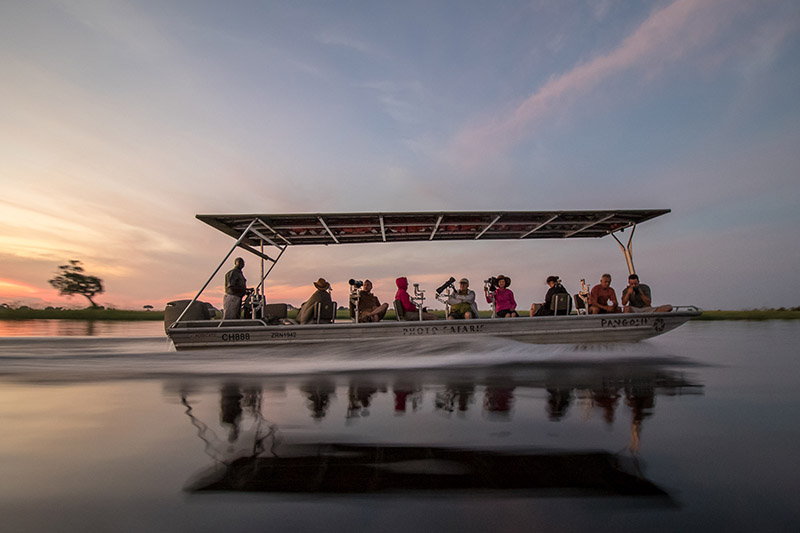 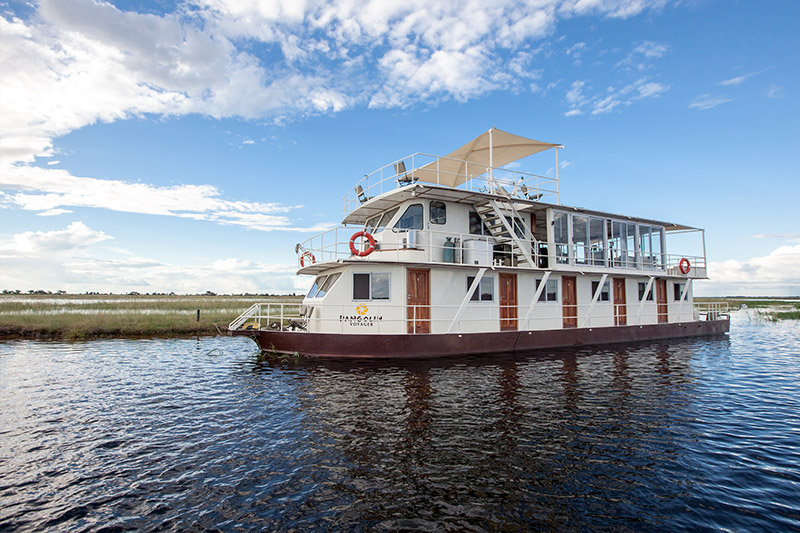 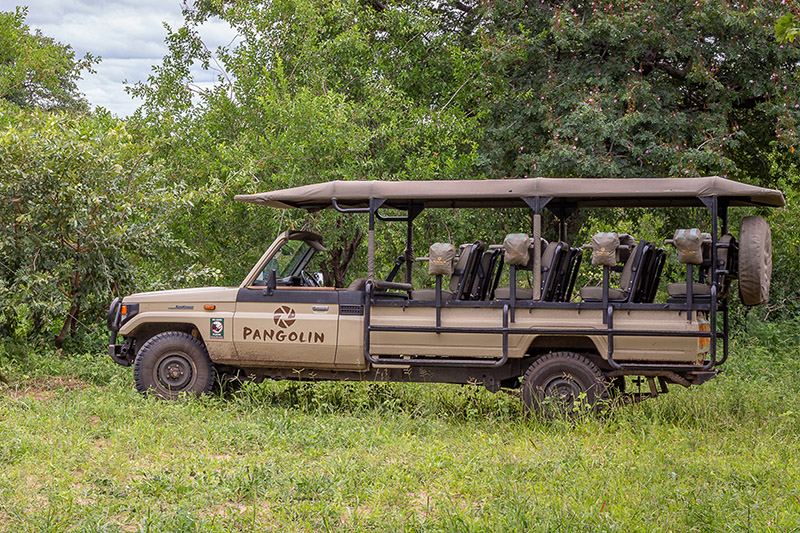 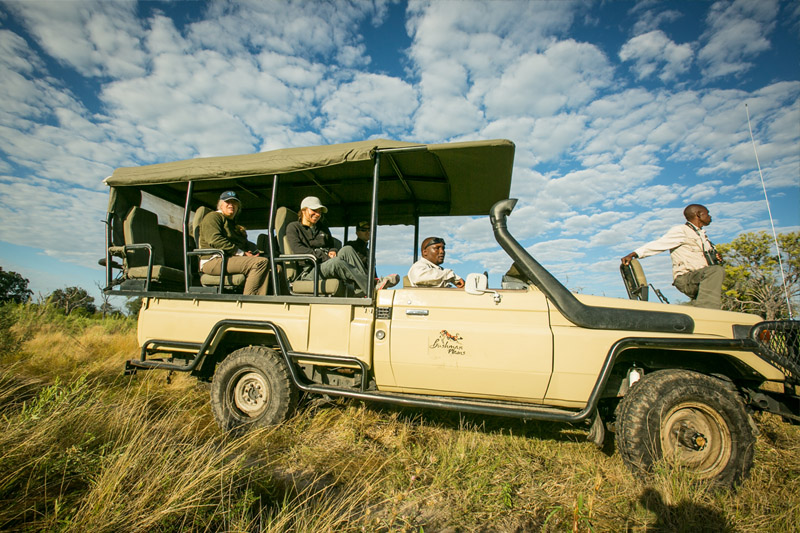 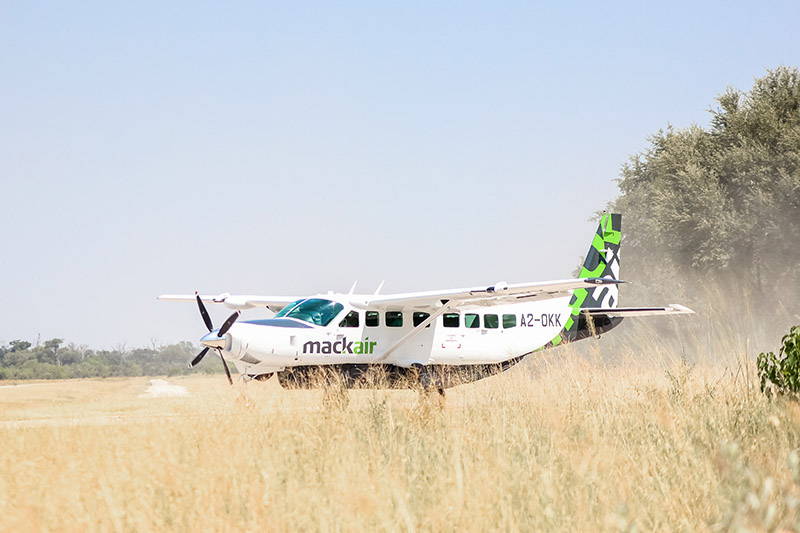 Finally, and most crucially, it is very important to go on a photo safari with the right photo hosts and guides to maximise your experience. Choosing the right one can be a bit of a minefield.

As digital photography has taken off, more well-known (and indeed award winning) wildlife photographers have pivoted away from making a living from stock photography (which has dropped dramatically in value over the last decade) to hosting clients on safari. In most instances this works well, but sometimes the transition from photographing for yourself to helping others, has proven tricky and resulted in disappointed clients who feel they were just there to pay for the “pro” to be in the field to get his or her images. 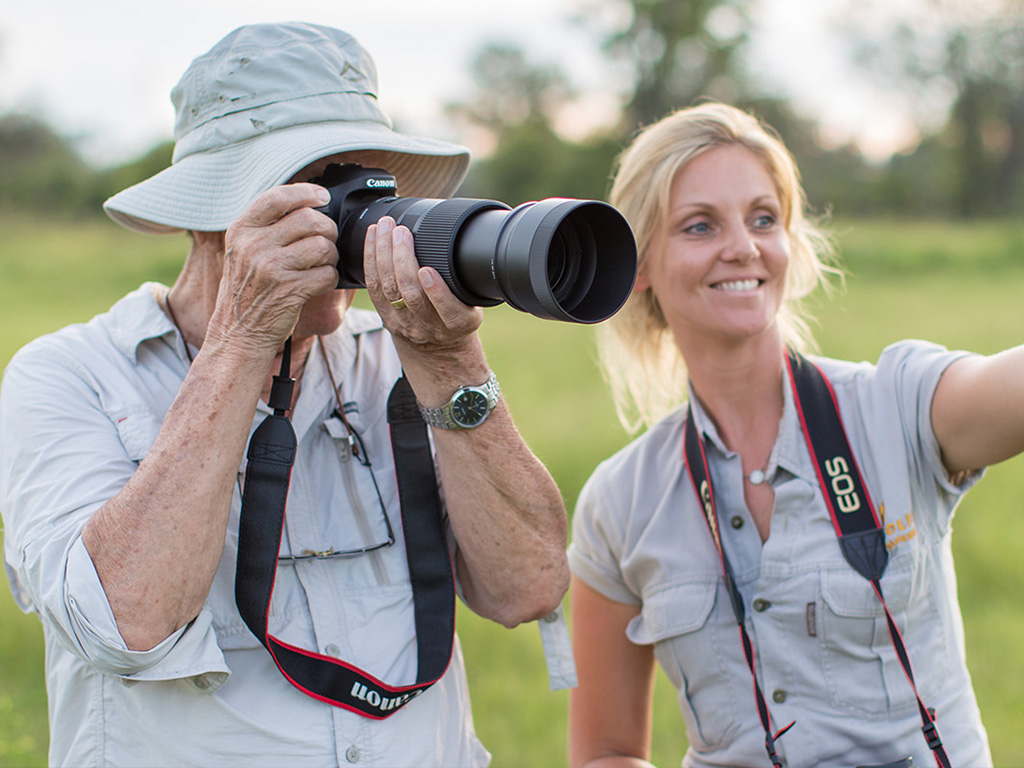 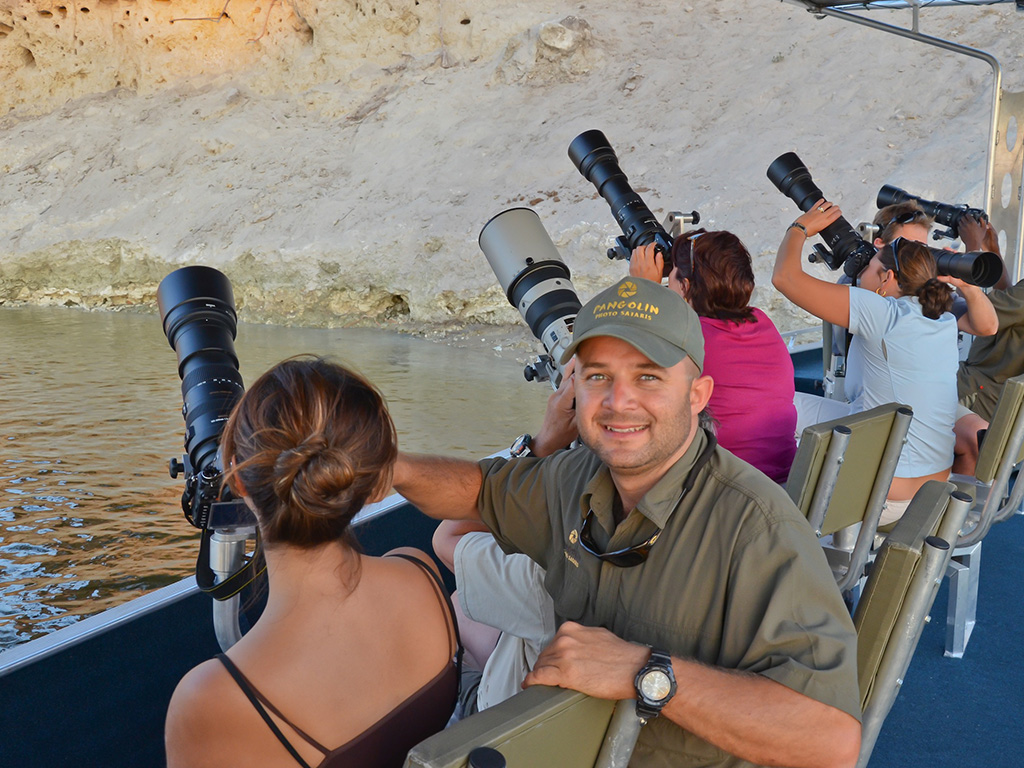 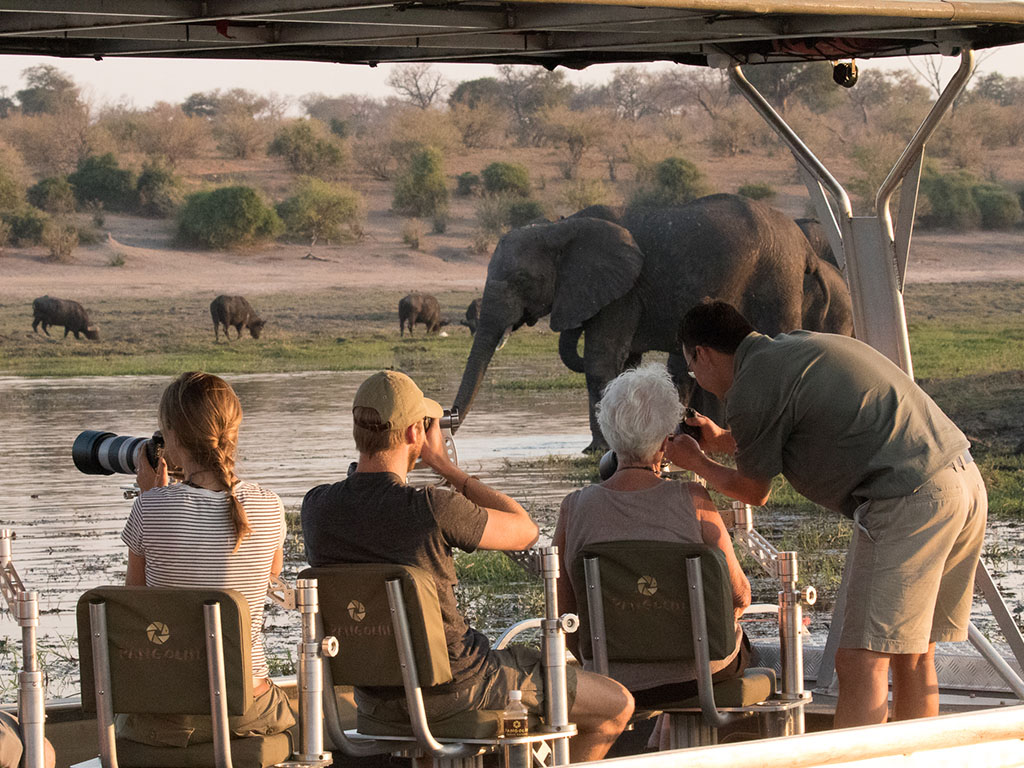 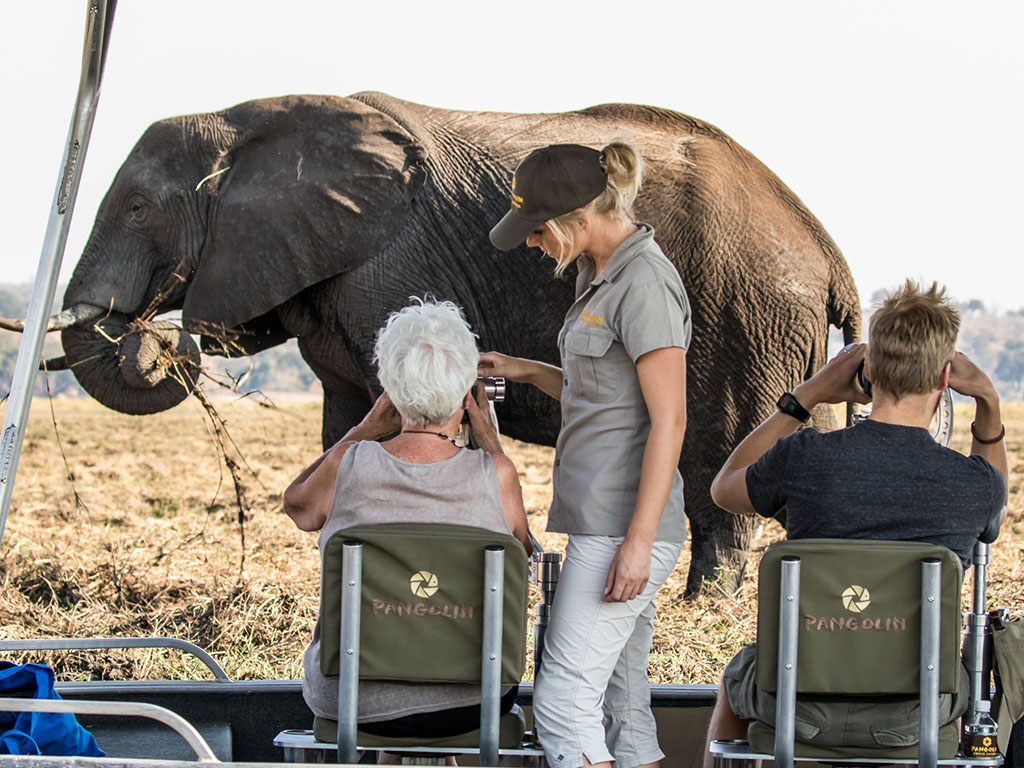 How to chose the right photo host for you. 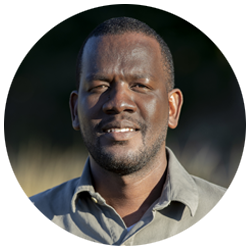 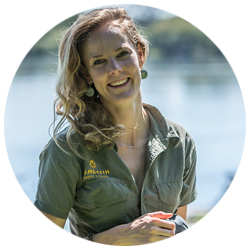 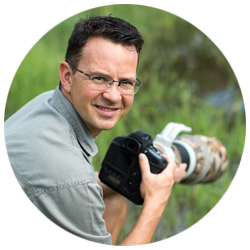 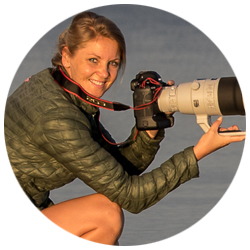 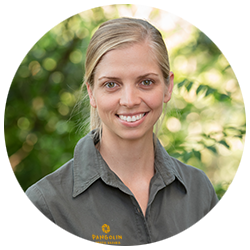 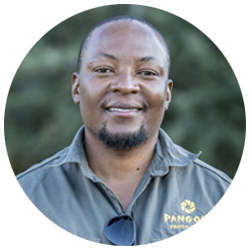 In conclusion. Wildlife photography is not the niche activity it used to be. All you need is the gear and patience and someone to show you how to make the most of each situation. It doesn’t matter if you are artistically or scientifically inclined by nature. There is no need to feel intimidated if you are a complete beginner…everyone started there too, and wildlife photographers tend to be a generous bunch in the field. We often find “hardened pros” taking “newbies” under their wings, with advice on camera settings and different creative ideas.

Everybody wants to return from their safari with beautiful images to remind them of their time and experiences in Africa and with Pangolin Photo safaris it’s just that much easier!

Pangolin Photo Safaris, where “Everyone Is A Photographer”. 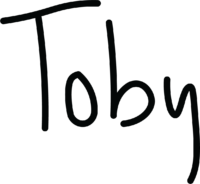