Remembering African Wild Dogs is the sixth book in the Remembering Wildlife series created by Margot Raggett. We are incredibly proud to support this very worthwhile initiative. We are even prouder that this year images by Charl and Sabine are being considered for inclusion in the book.

All of the books in the remembering wildlife series contain images donated but some of the best wildlife photographers in the world and it is a real honour for the Stols’ to be considered.

Along with donating images Pangolin Photo Safaris also donated a 4-night stay at The Pangolin Chobe Hotel to the Kickstarter campaign and we are pleased to say it as snapped up and contributed $2,500 to the fund. 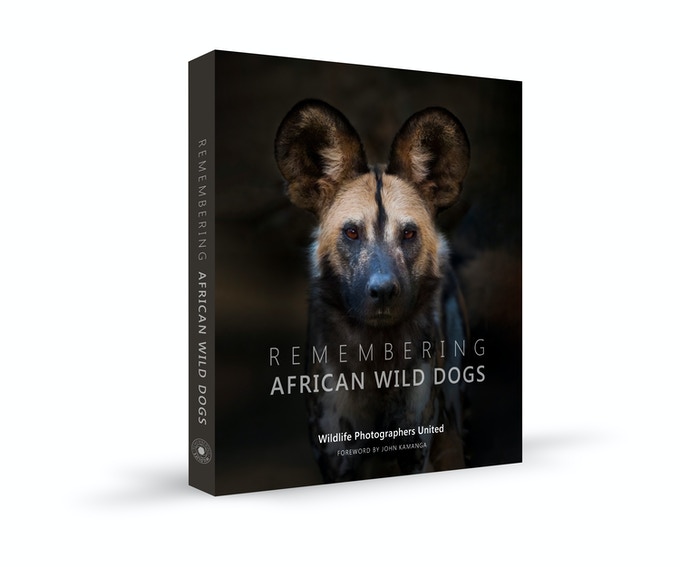 Order your copy of the book today. Click here.

What is an African Wild Dog?

African Wild Dogs (also known as Painted Wolves and Cape Hunting Dogs) are Africa’s largest canine predators and sadly one of its most endangered. It is estimated that there are less than 7000 individuals left in sub-Saharan Africa – which is less than Cheetah!

They are diurnal (day time) predators hunting in packs and using their speed, cunning and cooperation to bring down their prey. African Wild Dogs are arguably the most proficient hunters when compared to the big cats. Their success rate sit at around 70%.

They are incredibly social animals with tight familial bonds. They are led by a monogamous breeding pair who dictate the activities of the pack. The pair produce litters of pups each year which is supported and protected by the whole pack. The pups are normally born around March/April each year. They remain in or around the den until they are able to join the pack.

During this time the pups are never left unattended and the pack returns after each hunt to regurgitate food for the pups. After they have been weaned of course. Any sick or injured member of the pack will also stay behind at the den and be cared for and fed by the returning healthier pack members. 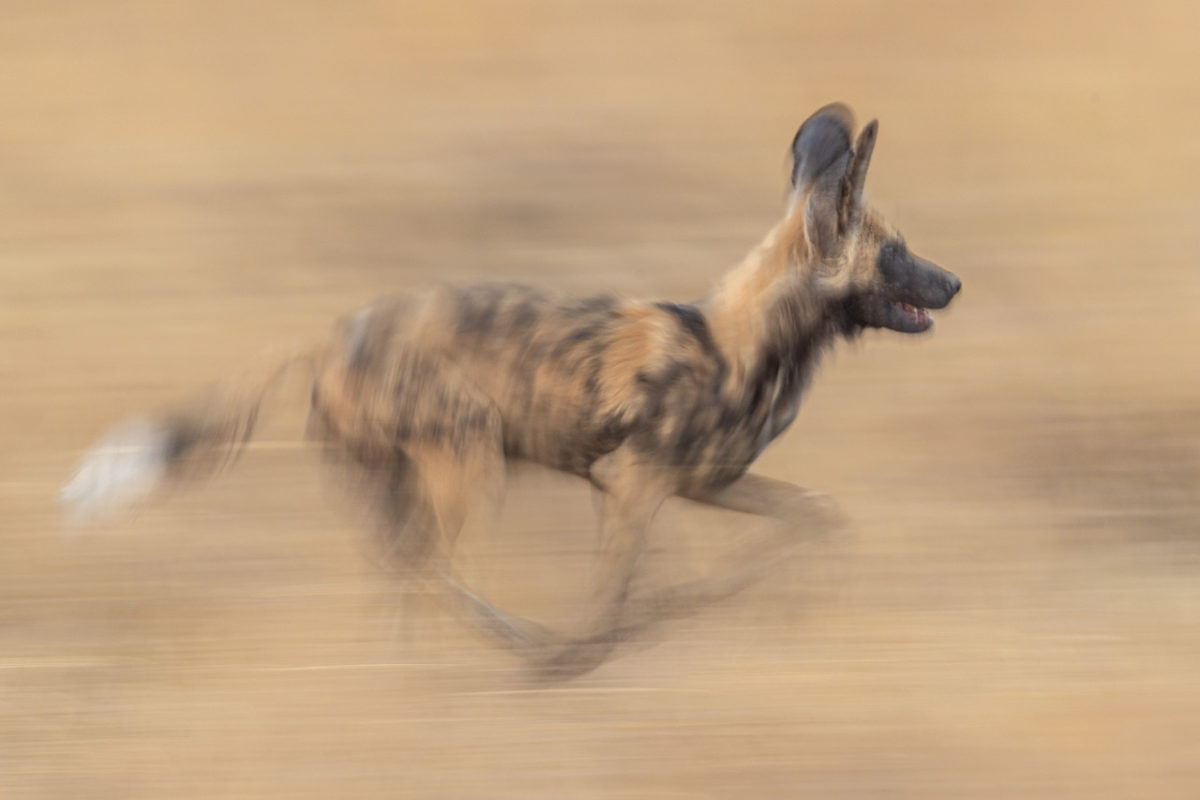 African Wild Dog at full tilt by Charl Stols. To learn how to perfect this sort of panning shot check out our blog on The 5 Shutter Speeds you need for Wildlife Photography

Where do African Wild Dogs live?

African Wild Dogs are present in most of the countries in Southern and East Africa but we have recorded more frequent and reliable sightings in Botswana – mainly in The Okavango Delta. Wild Dogs have huge territories which span concessions, national parks and also community and farmland. They can cover huge distances in a day and so pinpointing where and when they might be is obviously tricky.

The best time to see African Wild Dogs regularly is when they are denning. This is in the first half of the year as they will stick close to the den sites. Wild Dogs are at their most active in the early morning hours or the late afternoon. If there are dogs in the area we will try and locate them in the late afternoon. This is when they wake from resting during the heat of the day and prepare to hunt.

When they start to stir they re-establish their familial bonds with some play and rough and tumble and then they head off. Following an African Wild Dog hunt is a frenetic, bumpy, dusty but hugely enjoyable event.

What do Wild Dogs hunt and eat?

The dogs spread out looking for prey but remain in constant contact with one another. When one dog zeros in on a potential target he or she will call in the other dogs to assist. they will generally run down their prey, which is normally an antelope or perhaps even a warthog.

They demonstrate impeccable teamwork and skills as they chase their prey to exhaustion often running around in front of the hunt to ambush the fleeing animal. It is this intelligence and cooperation that make them such effective hunters.

The kill itself is often a very gruesome affair but mercifully quick. Unlike the big cats who will go for a stranglehold around the neck and muzzle, the dogs grab any part of the animal. As soon as it;s down they start eating even while it’s still alive. Its a frenzy. the animal they have does die very quickly through shock and bloodless. A large antelope like an impala can be consumed by a pack of dogs in a matter of minutes.

Ironically it was this killing method that meant in the 18th and 19th centuries the African Wild Dog was cast almost demonic. They were therefore persecuted as an un-Godly creature by hunters, settlers and farmers. This combined with the propensity for wild dogs to target domestic animals such as cows and sheep has also led to extensive human-animal conflict. 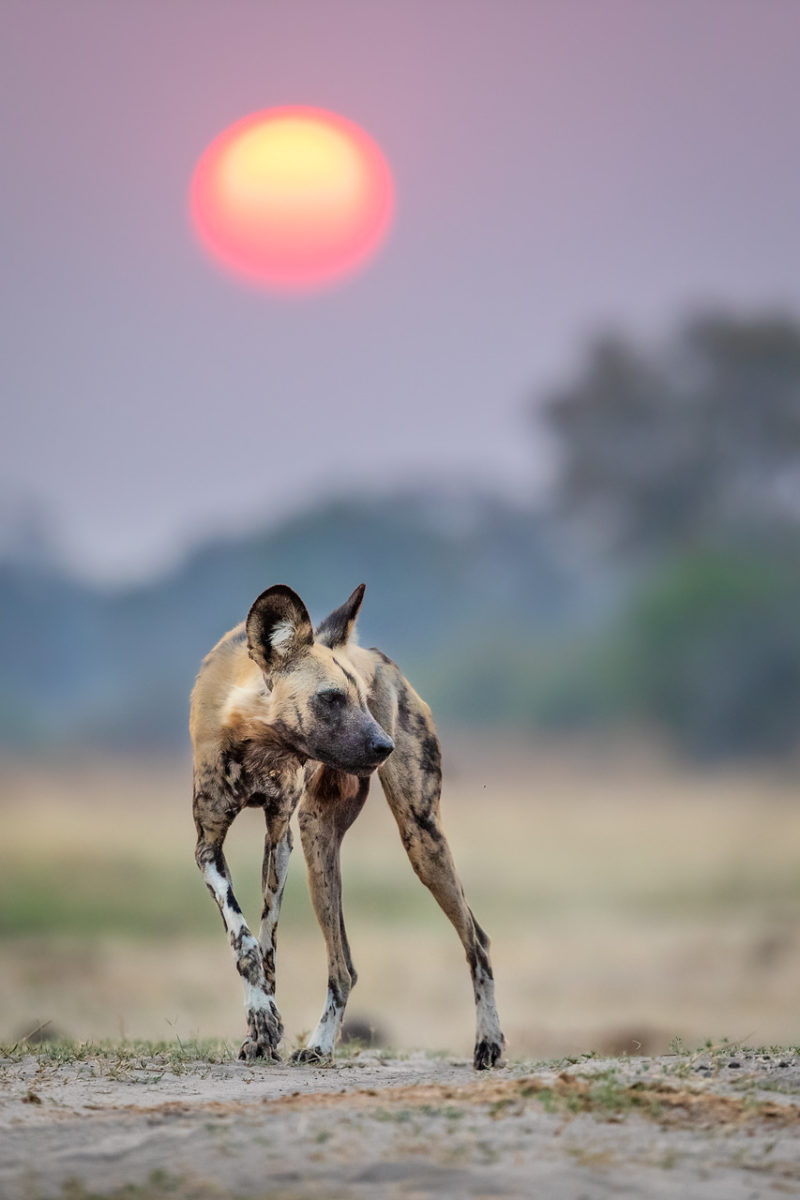 Join Charl and Sabine on Safari

Throughout the year Charl and Sabine lead groups into the Okavango Delta on our 10-day Chobe, Delta and Kalahari safaris. It is in the Okavango Delta that we have most of the African Wild Dog sightings. If you are interested in joining them on safari then please fill in the form here and one of our safari planners will get in touch with you and send you all the information you require.

Sign up to The Friday Focus mailer for photo tips, gear reviews and safari specials. Every Friday!

About the Author: Toby Jermyn