A day at Sling Aircraft with Guts & Toby

We like to think of ourselves as a “challenger” brand. When we started Pangolin, everyone told us that we were on a hiding to nothing as wildlife photography was “too niche” and we would never find enough clients to really grow the business.

We are pretty sure that Sling Aircraft Chairman, James Pitman and his partner Mike Blyth probably endured similar naysayers when he decided to launch his experimental aviation company and thus we hit it off immediately when Guts and I visited their factory just south of Johannesburg last week.

Sling aircraft had a remarkable start when James and his partner Mike Blyth not only designed their first prototype aircraft but built it and then flew it all the way around the world from SA to The USA and home to showcase their design to flying enthusiasts at EAA AirVenture Oshkosh. That first cross ocean flight must have been the longest of their lives!!!

If you don’t know Sling from their social media – especially YouTube – then you should really take a moment to check them out. Like us, they refuse to take themselves too seriously (as you will see in their YouTube Top Gun Slingers parody). Their channel is full of adventure and documents the progress that this company has made in an industry full of big hitters.

Guts is a huge fan, and he has even more reason to be as he currently sits at No 88 on the waiting list to take delivery of a kit to build his own Sling! James and I have a very good mutual friend, Tim Parsonson, and when we knew that Guts and I were going to be in Joburg for a couple of days so he helped arrange a visit to the Sling Facility to meet with James and his amazing team.

I have never seen Guts so happy! He was like a kid in a candy store! 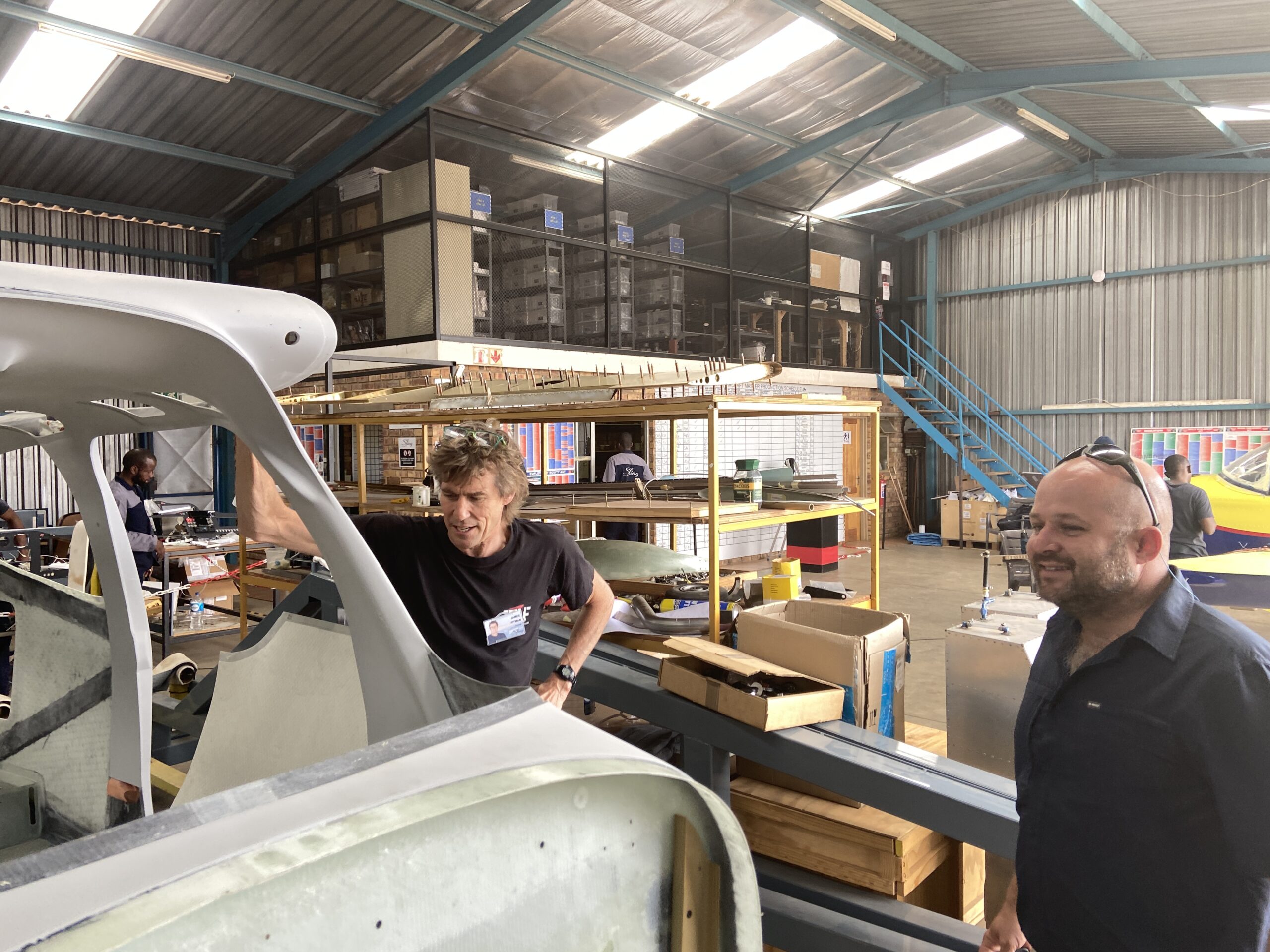 James and Guts discuss plans and ideas about these planes in the Chobe!

After a brief meeting with James and his salespeople to chat through ideas for self-flying photo safaris (watch this space) we were honoured to be given a tour of the factory by James himself. The factory is spread over nearly a dozen hangars at the Tedderfield Airfield and as we entered each one, we found people busily fulfilling the hundreds of orders that have been placed.

In one we found people sorting through huge boxes of parts that are due to be shipped to self-builders around the world. In others we found craftsmen and women hand stitching the seats, a hangar filled with electricians wiring the dashboards and another room filled with engineers designing and perfecting new innovations for the already world-beating experimental aircraft design. Apparently, they can design something in the morning, fabricate it by lunch and have it in the air by teatime! Remarkable.

Guts has opted for his plane to be a High Wing version of the Sling Aircraft and is deliberating between the tricycle and tail dragger versions. The high wing will allow for pictures to be taken from the aircraft without the obstruction of a wing below the fuselage.

The Sling High Wing is available as tricycle (above) and taildragger (below) variants.

Anyone who knows Guts won’t be surprised to hear that he intends to build the plane himself and he has promised me a video series of his progress for our YouTube Channel. We toured the factory for a good half an hour and then James announced that, if we wanted, he could probably fit in a quick flight, before his next meeting…such is the convenience of having your office on an airfield!

We jumped at the opportunity and James was gracious enough to offer Guts the pilot’s seat – he is suitably qualified, I am delighted to add. I jumped in the back and within 5 minutes we were airborne. 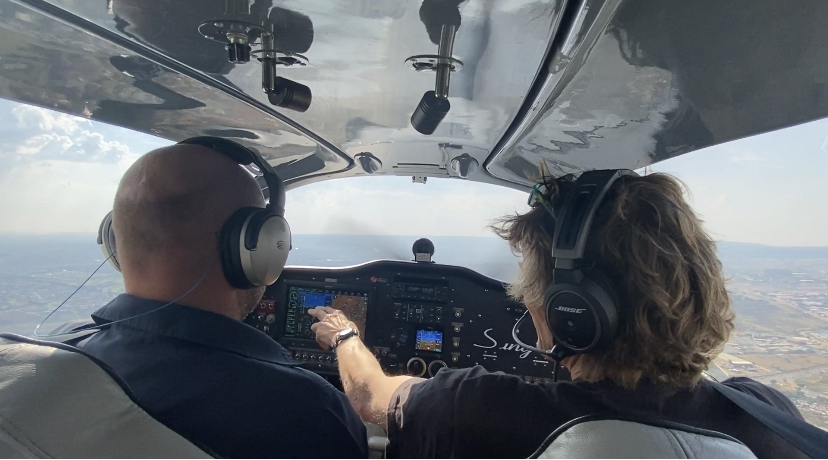 Guts and James set a course for The Chobe – under 4 hours apparently!

This Sling was the 4-seater version and incredibly spacious. The dashboard is state of the art with glass displays, well laid out instruments and dials and large windows offering incredible views as we climbed up into the skies over Soweto below.

Guts and James chatted urgently about the handling and features of the plane as I took in the views of several iconic landmarks. We programmed the autopilot for The Chobe and were delighted to be shown that the flight time would only be just under 4 hours – using exactly half the fuel of a Toyota Land Cruiser which would take 16 hours to do the same. It is these economics and time saving that persuaded Guts to put down his deposit in 2019!

We turned to go back to the airfield and then James suggested, rather calmly it has to be said, that perhaps we should roll the plane to demonstrate its true performance and agility!

To be honest I thought he was joking but it soon became apparent that he was serious and took control from Guts. Before I knew it my whole world was “literally” turned upside down! I was dumbstruck – for once! So dumbstruck, in fact, that when I regained the power of speech my first words were “oh no I forgot to film it”. “No problem,” said James “get your phone ready and I will count us down to another one!” – see the video below to see what happened!

James gives Guts and Toby an adrenaline rush as he rolls the Sling.

I am putting this down as the most extraordinary, fascinating, exhilarating and unforgettable business meeting of my life. I wasn’t even there to buy a plane (and I have to say that having been in one the price tag seems like the bargain of the century) but in the end, I found myself fantasizing about liveries and configurations of a Sling Aircraft of my own.

All I have to do now is ask Guts nicely if he wouldn’t mind building mine just after he has finished his one!

If you would like to know more about Sling Aviation please visit their website (www.slingaircraft.com) and if you are already a Sling owner we will be offering preferential rates for your stay at the Pangolin Chobe Hotel (800m from Kasane Airport). Let us know when you want to fly in and we will be there to meet you!!!

Guts and Toby safely back on the ground after a brilliant day.

The Best of Chobe

The Best of Chobe 7 day photo safaris are scheduled throughout the year. You will spend 3 nights on our houseboat, The Pangolin Voyager, and then cross over to the Pangolin Chobe Hotel. The Best of Chobe Photo safaris are hosted by our Pangolin Photo Hosts throughout. By the end of the photographic safari you should be able to shoot on full manual mode. Prices start at $2,450pp

Do you own a Sling? Send us an email and book your safari!